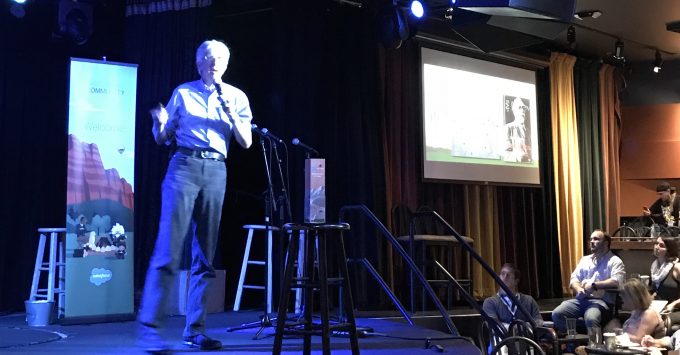 Earlier this Spring I was at a community event. At one point one of Salesforce’s top leaders and speakers began giving the presentation that I’ve seen a few times now – describing and outlining the Fourth Industrial Revolution.

After a number of minutes and slides, the room erupted into audible irritation and discontent. I’m pretty sure if there were pieces of fruit to throw, they would have been thrown.

I understood how they felt. Even I, immersed in this Salesforce ecosystem, was perplexed the first time I saw the fourth industrial revolution slides. What was I supposed to be afraid of in the fourth industrial revolution? Losing customers? The gap of customer expectations to reality? How does the academic and economic term Fourth Industrial Revolution relate to me, as a business leader?

I heard a phrase once in spiritual circles that if it doesn’t also apply to a single Mom in Haiti, check its relevancy.

I don’t know any single Moms in Haiti, but I do know some in Nicaragua. Things are tough there now. In the midst of it, my family has gotten messages from Isabel on Facebook. Her family that I stayed with twenty years ago will likely never get a landline phone, but many in her community have mobile devices. If I told her there’s an industrial revolution afoot, I’m pretty sure she would tell me that Nicaragua doesn’t make many goods, and did you know? there’s bigger political concerns right now. Yet things are changing radically there, yes, in scale and scope and behavior – with its people communicating with each other and overseas via Facebook and Mobile Phones.

Salesforce as a company is unique in that its values are not built on fear and scarcity, but on opportunity. As we speak to customers and potential customers and business leaders, what is the invitation we are offering when we speak of the fourth industrial revolution?

The power of the Salesforce platform lies in its ability to put innovation in the hands of every business that users it, from nonprofits to international enterprises. An Engagement Revolution requires no explaining. This is the invitation – to understand the moment we are in – full of risk of inequality, certainly, but also opportunity – to transform the way we work and lead. It’s an Engagement Revolution.

Want to know more about the term Fourth Industrial Revolution? See this article by Schwab from the World Economic Forum.

Want to move businesses and nonprofits into action?  – I prefer Engagement.