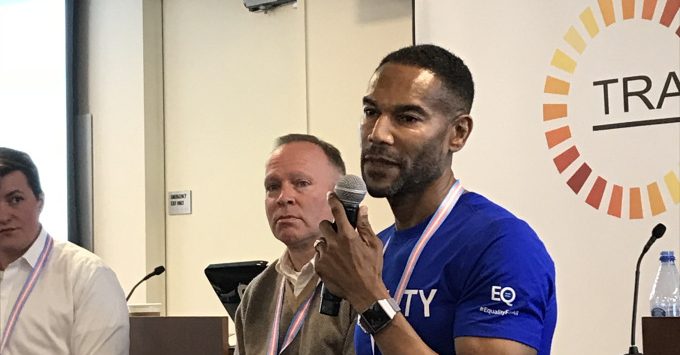 In late March, days before the crowds descended on San Francisco’s conference center for the sold-out TrailheaDX event, Salesforce hosted 200+ people for the second-annual Transform Tech event – a day-long conference organized by the Transgender Law Center.

The event had a lot of different people and institutions participating – trans and nonconforming people currently working in industries like tech and law, allies who worked in human resources and wanted to help guide people and institutions through the nuances of roadblocks and bias in the hiring process, corporations who were trying to be more trans and gender non-conforming friendly.

The panels and breakouts reflected the diversity of people there – breakout panels on raising visibility on non-gender conforming people in tech, and those on corporate social responsibility. I think many of the participants were grateful for the safe space created to hold conversations that weren’t taking place elsewhere. Transgender Law gave important updates on the advocacy work they are doing nationally, as well as the individual support services provided through the legal helpline.  I gained new personal insight into the sheer amount of energy it takes for a non-gender conforming person to navigate work life in the US or overseas, and how much more effective that person could be without that stress. I presented an ignite talk on a favorite topic of mine – finding mentorship (hint: it’s many people, not just one!).

So many lessons learned and relationships formed. Yet it is a moment from the day that weeks later I keep thinking about – and that taught me much about courageous and authentic leadership.

Mid-morning, a woman interrupted one of the sessions – a corporate-focused panel. “I don’t want to hear any more of this,” she said. “I’ve come all the way from LA and I haven’t heard in a substantial way from any Trans people yet.”

Her interruption was a good one.

I think it made all of us in the room, sit up and think for a minute. Who was this event really for? and was the event trying to be all things to all people? And was it surfacing the voices it needed to?

Then the woman asked a question of the panelists – essentially why are you here, anyhow.

When Tony Prophet, Chief Equality Officer of Salesforce, began to answer the question, she interrupted again.

And that’s when I sat up and paid attention. Because when you are talking about race and gender and discrimination, things are never comfortable. Leadership is not made in the moments of ease. It is made in those moments of friction, of making hard decisions, speaking things that not everyone will like, and risking loss of friends or customers.

Tony said, “You asked me a question, and I’m going to answer it. Don’t interrupt me. This is my story, and it’s extremely important to me. In fact, it’s the only one I’ve got.” and then he told why this issue mattered, to him, in a personal way.

Later he approached the woman for a 1-1 conversation. I don’t know what they said, but I got the feeling that Tony was listening authentically, even if he didn’t agree with all of it.

My respect for this man, who I had only known on LinkedIn and Twitter, grew as I watched him model courageous and authentic leadership, and reinforced these lessons I’ll try to incorporate into my own work.

Thanks Transgender Law Center for hosting a great event – looking forward to next year!