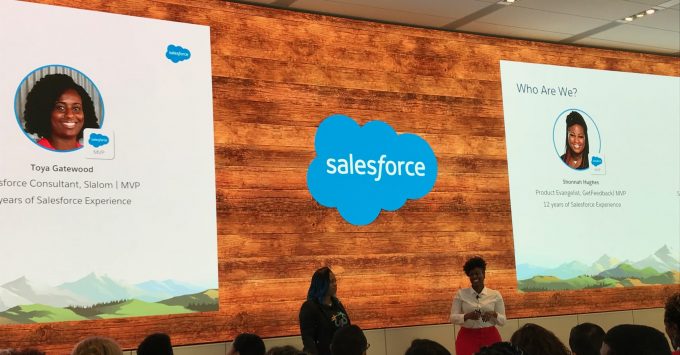 It was the day after Dreamforce week, and I was riding the career high of speaking in the Admin Theater on Day 1, and presenting before thousands in my first keynote session on Day 3. That’s why, when I got the email to my inbox, I laughed out loud.

It was a message from a major organization in the Bay Area that I’d spoken with months before about a project – actually, I’d spoken with them years before as well – telling me that they’d chosen another consultant. I laughed because the universe has a way of correcting me – and I knew this was a gentle nudge to keep things real, to keep that ego in check. I had already written off the potential project months before – but I needed that ego nudge today.

Don’t get me wrong – the rejection stung. I am super competitive – and more than wanting to win, I don’t like to lose. But I appreciated the universe-nudge that letting go of ego helps me understand my power, without putting myself at the center of the circle.

Matthew Morris recently spoke about this – and how he’s seen women in particular have a unique advantage of being better architects by letting go of ego while leading technology projects.

“I’ve reflected on my experiences as I have worked to develop my architect skills and I have come to the conclusion that the women I worked with were superior developers/testers/analysts/architects because they exhibited better communication skills, were well organised, had a lot less ego than many of their male colleagues.” – Matt Morris, as quoted by the great group Ladies Be Architects

What does less ego (or humility) look like in practice in the world of technology? For me, it’s a practice that shows up like this:

So how can we cultivate humility to be better leaders and technologists, without having to get a rejection letter sent by the universe on a weekly basis?

“I’ve learned that there’s absolutely nothing wrong with saying, “I don’t know the answer to that, but I’ll find out,” or even, “Give me a day to think about that and get back to you.” We need to take the time to ask questions, but also slow down enough to *THINK*, especially since there are so many approaches to accomplish the same thing; you have to take that clients’ entire architecture into consideration, along with a bunch of other factors.” – Toya Gatewood

“I was always afraid of sounding like I don’t know what I’m talking about – a bit of impostor syndrome, I’m afraid! But it’s good to work through things together – I would hate to just slap an answer on someone without digging in a bit. You might set them up with the wrong thing just because you thought you knew what they needed without asking! I have to explain sometimes this is a process” – Becka Miller

I’ve been deep into the book Radical Candor: How to be a Kick-Ass Boss without Losing your Humanity – and Kim Scott suggests asking “What am I missing here?” as a way to get better feedback from teams. It’s more proactive and better at getting folks to respond then something innocuous but meaningless – like “Does this make sense?”.

This is a tricky one for me. In the past I’ve confused humility with taking care of others’ needs first. Humility has an orientation of being able to learn from each situation and conversation, with openness – but also with a strong sense of self. I’ll never forget a conversation I had with a woman this spring – where I asked a question with true curiosity (not as a way to simply plan my retort). When she explained her perspective I had a clearer sense that the way she felt was not truth to me – that it fundamentally did not resonate with the way I moved in the world. And this realization helped me clarify what was important to me. Humility does not mean letting others talk over us. Humility doesn’t mean letting others drive the agenda or define what we should care about. Humility means approaching each conversation with an opportunity to learn something – even if that something is about ourselves.

Some days, it’s overwhelming to be a person in the world. And on those days, once I get up from a good rest, I try to remind myself of that which is uniquely mine to focus on: to grow daily in courageous leadership, and to shine that light on my small piece of the puzzle at work, and in my community. It can be hard to get started some days, but start I must.

Humility is moving forward, with a clear understanding that I don’t have all the answers, and moving forward anyway. As Lao Tzu famously said “The journey of a thousand miles begins with one step.”