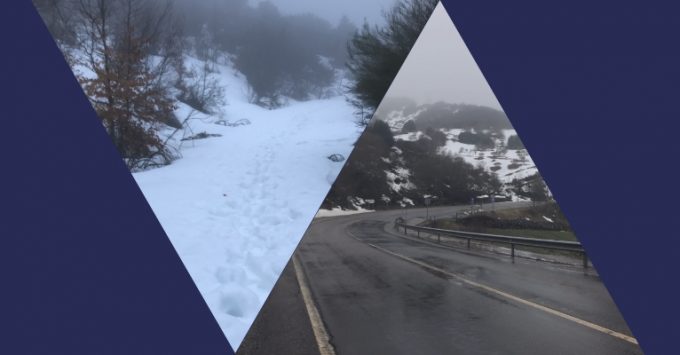 A year ago I had the opportunity to trek through northern Spain, as part of a ten-day journey on the historic pilgrimage route El Camino.

There were so many learning moments for me on the journey, but one stands out as particularly poignant. I had awoken before dawn, eager to make some serious kilometers that day, and I needed my headlamp as I crested the top of the mountain and entered into the town there – which was covered in fog. I stopped to drink a Café con Leche, and asked the shopkeeper which way to the “Camino” (the path) – which is well-signed with scallop shells leading from town to town.

I heard her say the words “carretera” (highway) and I assumed that the path was close to the highway’s marker. And then, finding the trusty scallop-shelled marking signs, I began walking – not on the cobblestones of the previous town, or on the dirt paths I’d spent days treading – but in snow.

The snow was halfway up my calves, and not dressed for winter climbing, it was slow-going. But I made better progress by trudging in the footsteps of the others who had gone before me. And as the weather continued to deteriorate, I got colder and colder. I wondered how much time I had lost already, with many kilometers to go ahead. Now the footsteps were fewer and fewer – and, had I not seen the scallop-shelled markers beside me, I would have wondered if I were still heading in the right direction.

If you’ve never met me, you might not know that I pride myself in my persistence. Where others give up, I press ahead. It has helped me achieve great things. And like most of my strengths, it is also my weakness.

Because after 30 minutes of hiking alone in calf-deep snow, there were abruptly no more footsteps ahead of me. Everyone else had turned around long before. Alone, on that mountain top I finally heard the still small voice –

I lost an hour making my way back – where I joined the other pilgrims walking alongside the highway’s edge – just like the shopkeeper had indicated. The highway had its own peril of course, but I moved quickly on this leg of the journey to make up lost time.

As business leaders it’s extremely difficult to recognize when a product or project or process is no longer working. We pride ourselves on being effective and competent (that’s what’s gotten us here, after all!), and perhaps if we just apply the right resources and get our team on board we can reach the end goal. And if we’re really persistent, the people around us may stop helping us discern the decreasing number of footsteps on the snowy path. Grit wins in business and life, except when it doesn’t. What are we marching toward, with grit and determination – and missing the moment of courageous necessity to take a different course?

I know that I’ll never get out of the persistent / effective trap if I never stop to have time and space to evaluate what’s working. Taking one day/quarter (at minimum!) to evaluate what actions I’ve been taking and measure them against my goals is critical. This should be done solo – and then again with the team if appropriate.

There’s one leader I really respect who looked at their calendar and had back to back meetings for four of five days. They literally did not have time to stop and process anything in the meetings, or discern how to think strategically about the next steps.

Last year I was part of a project gone wrong. We were working hard, for sure. And every two weeks we were making new tasks and priorities. Yet despite our hard work and determination, agile sprint cycles be damned, we ended up with something that no one was happy with. I got this note from our client.

The process was quite stressful and became quite drawn out and costly. In the end, I don’t have the overall features I was looking for or the fine-tuned product I’d expect to have given the time and cost that went into the project.

Looking back, we kept iterating on getting a solution to work – but we missed the problem we were trying to solve. Or to state it another way – we were trying to address many things at once, and in trying to do it all, we lost sight of the client’s most important – a particular experience for a subset of their constituents.

This question comes from Kim Scott’s fantastic book Radical Candor. The idea is to ask a non-threatening question, not as a script, but in a genuine way, to get those around you to help discern and debate next steps. She said she regularly asked her teams “tell me all the reasons we should not do that”.  This approach requires a foundation of trust (getting candid feedback requires that folks feel secure enough to give it).

[I love the library – but if you want to avoid $25 in fines like I accrued since I would not return this book and finally bought my own, use my affiliate link and Amazon will give me funds toward my reading habit – Radical Candor , and also for the books below].

I’m not talking about decision making by consensus, or allowing everyone – including yourself! – to second guess a decision once its made.

This is a moment of circling up team members or trusted friends after a moment of niggling realization that more of the same isn’t gonna cut it.

Back in my serious rugby days we did a lot of training – uphill, pulling things, sprints that had crazy names and that used beeping timers that I’ve purposely blocked out. Perhaps it’s the rosy memory talking, but even though it was hard, it felt good. It felt aligned with a higher goal.

There’s no Marie Kondo about any of this, that every project will bring me joy! And yet, even when I’ve had some of the hardest conversations with clients, or employees or business partners, they felt – if not good, exactly – the hardest, right-est next thing.

Difficult doesn’t mean joyless. Jennifer Tejada, in this fantastic (and short 3 minute) video series, produced by Salesforce and focused on women leaders, says “If it’s not fun while we’re doing it, it’s not worth the time and energy”.

Finding joy for the journey,

The Art of Making Mistakes

How to Find a Mentor in the Real World

Grit:The Power of Passion and Perseverance